Where no toddler has gone before…

Now that our daughter has stood up on her own (albeit for seconds at best), and has shown signs of beginning to walk, my wife and I started “baby-proofing” the apartment. We were particularly worried (of course) about the kitchen, that place of knives, pots and pans, and gas burners. 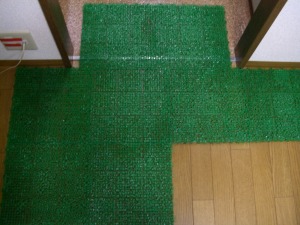 More effective than a gate?

A gate would seem the obvious solution. Problem: by a quirk of apartment architecture, the entrance to our kitchen is just barely too narrow for anything available on the market.

Solution: Listen to your relatives. My wife’s aunt (who herself raised two children while working full time at a junior high school) suggested that we simply put cheap squares of plastic artificial “grass” at the entrance.

The theory was that babies can’t stand the way the plastic feels, and so they avoid it. And once we got four of the 100 yen squares, the theory did, indeed, prove to be true. Our daughter simply didn’t like touching them, and halted at the kitchen entrance.

Of course, only one strip of the stuff turned out eventually not to be wide enough for our wily child…who quickly figured out how to extend her feet across the turf and slink into the kitchen without touching the turf, like some sort of pink pajama-clad baby ninja. Two rows of squares did the trick, though, and now she spends her time sitting in the open flooring space, just outside the turf, gazing into the kitchen with envious (or maybe nostalgic?) looks towards the bottom sink cupboard.

Needless to say, we still don’t entirely trust the turf to work much longer. We figure that, any day now, our daughter will figure out how to put her Dr. Seuss books on top of the turf as a protective layer…or she will simply come to the realization that artificial grass just doesn’t feel so bad.

But at least it was cheaper than a “baby gate”!

Long ago, I gave up my high school dreams of becoming the next Carl Sagan and instead wound up working (in order) at McDonald's, a '60s-themed restaurant, a video rental store, a used bookstore, a computer seller, Kinko's, a Jewish newspaper company, and an HR firm. I eventually became a teacher of intercultural communication in Kyoto, where I vainly attempt to apply quantum mechanics to language teaching, practice martial arts and Zen Buddhism, and always keep one eye on the sky. And yes, I know my profile photo's backward. I just think it looks better this way.
View all posts by MThomas →
This entry was posted in child safety, day care, parenting and tagged child care, child safety, child-raising, Japan, Japanese, Paternity leave. Bookmark the permalink.

3 Responses to Where no toddler has gone before…