This past weekend, my wife and I took our daughter for her 7-month checkup. The check-up system in Japan varies depending on the city. A nearby city to ours has a checkup only at the 6th month, while ours does it between the 3rd and 4th months, the 7th month, and then the 1st year mark. 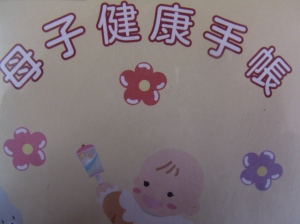 Our daughter also got a DPT booster shot (diptheria, whooping cough, and tetanus). We tried to sign up for the H1N1 virus shot, but naturally (like everywhere else in the world) there simply isn’t enough stock available. We were told that reservations were currently not being accepted, and to call back in a week or so.

When arriving at the clinic, we handed over the health record book that my wife received when she went into for the child delivery. This book is called “Boh-shi-kenkoh-te-choh” in Japanese, or Boshi-techo for short. The Chinese characters literally mean “Mother child health hand book.”

There is no “Father child health hand book” (which, if it did exist, would be called “Fu-shi-te-cho,” I guess).

My wife pointed out that the doctors and nurses should know the condition of the mother and baby whenever we have to have a health checkup. I have to wonder why on earth this information isn’t saved electronically on a hospital database. Japan is renowned as a technically advanced society; this is just one of many examples of where modern technology is shunned in favor of handwritten, pocket-sized “handbooks.”

Most irksome is the name “mother-child handbook.” It not only implies that the health of the father has no bearing on the health of the child, but also implies that the father is not expected to have any involvement in bringing the child to the hospital. This may once have been true, but surely this is an old custom that is no longer appropriate for a 21st century modern culture.

In front of us at the clinic registration desk was a father of two children. In one hand, he clutched the “mother-child handbook,” while asking about the possibility of getting vaccinations during the weekend, since he had to work during the week. The nurses didn’t treat him any differently than “mother-child” visitors. The man left, satisfied. Starting in late February, that might be me.

Now, about that “Father-child” book…

Long ago, I gave up my high school dreams of becoming the next Carl Sagan and instead wound up working (in order) at McDonald's, a '60s-themed restaurant, a video rental store, a used bookstore, a computer seller, Kinko's, a Jewish newspaper company, and an HR firm. I eventually became a teacher of intercultural communication in Kyoto, where I vainly attempt to apply quantum mechanics to language teaching, practice martial arts and Zen Buddhism, and always keep one eye on the sky. And yes, I know my profile photo's backward. I just think it looks better this way.
View all posts by MThomas →
This entry was posted in Uncategorized and tagged child care, health care, hospital, Japan, vaccine. Bookmark the permalink.