The first stage of three

A few days ago, I took my daughter to a scheduled dental checkup (shika kenshin), sponsored by our local municipal citizen’s welfare department. Like all the other health check ups (at seven months, a year, and a year and a half), the dental check up was free (well, paid for by our taxes!). Unlike the other health check ups, I was on my own this time (my wife had work).

My daughter and I arrived just after the doors opened at 9:30 and at the second story window I handed over the post card we got in the mail, along with my daughter’s boshi-techo, and was asked to fill out a questionnaire. This took me some time. I couldn’t read about half of the kanji (Chinese characters), so I started looking up some of them on my cell phone dictionary with trying to prevent my daughter from grabbing said cell phone.  Some of the questions were very specific:

I didn’t actually finish all the questions. After about 10 minutes someone came over and took the clipboard from me, saying that they would confirm the rest orally once the examination started. It was slightly embarrassing, knowing that my language ability was good enough to speak, but not to read. She gave me a numbered, laminated piece of cardboard and we went in to the main room.

As with the other health check ups, there were four stages, each consisting of consulting a different person. The first stage was the dentist. He was the only person whose qualifications were clear. (He checked her teeth quickly and pronounced, “Ijyo nashi” [no problems].)

After seeing the dentist, we were ushered into a waiting that consisted of several desks in front of the outer walls of the room, and several benches in a square in the middle of the room. Inside the benches several tots were playing with various kids’ toys. I took off my daughter’s shoes and let her wade right in. Time passed. People kept coming. After half an hour and an additional two dozen children the noise was deafening. 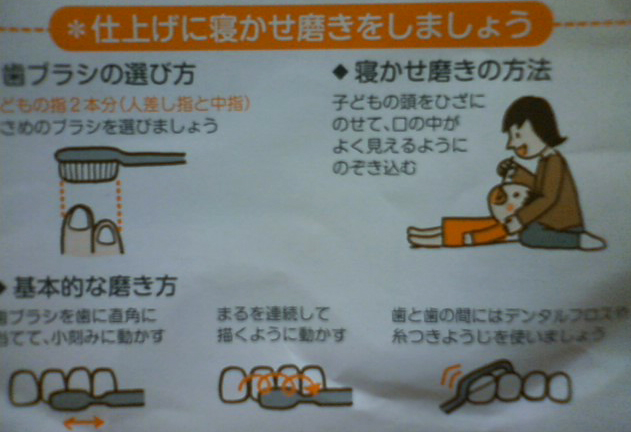 How to choose a brush, how to brush, and how to "finish up."

She then held up a set of plastic teeth and a toothbrush and instructed me that “the mother” should make sure not to brush strongly along the gums but to brush diagonally to the gumline. Men, she added, were stronger than woman and tended to damage the gums, so if I helped then I should be extra careful. I nodded and said, “Hai.” (What else was there to say?)

She then gave me a flyer and instructed me that “the mother” should make sure to “finish off” the brushing by having our daughter lay down with her head in the mother’s lap while the mother brushed. I’d seen this before…on some of the morning children’s shows…and thought it utterly ludicrous.

“Why is this necessary?” I asked politely.

The woman started a bit. Her reaction was almost as if nobody had ever asked this question before. “Well,” she explained, “you can see the teeth at the back more clearly.”

I nodded, and said, “Hai, wakarimashita.” Of course, that didn’t really mean that I agreed with her statement, but I didn’t see the point in arguing. I suppose that it was true, making your child lie down enabled a clear view of the back teeth (if you can convince your kid to open his or her mouth long enough and use a flashlight).

However (I neglected to remind the “mother brusher helper,” whose dental qualifications remain a mystery to me) the same would be true for adults as well as children. I also had no desire to try to force my daughter to lie on the floor, resting her neck on my knees while attempting to get her to open her mouth wide enough to see the back teeth. True to form, when my wife and I attempted just to brush our daughter’s teeth – while she was still standing – she clenched the brush in her teeth and shook her head vigorously while batting our hands away.

After saying thank you for the shi-age advice and detailed teeth-brushing info pamphlet, my daughter and I took a seat once again in the middle, toy-strewn floor area and waited for the next stage.

Long ago, I gave up my high school dreams of becoming the next Carl Sagan and instead wound up working (in order) at McDonald's, a '60s-themed restaurant, a video rental store, a used bookstore, a computer seller, Kinko's, a Jewish newspaper company, and an HR firm. I eventually became a teacher of intercultural communication in Kyoto, where I vainly attempt to apply quantum mechanics to language teaching, practice martial arts and Zen Buddhism, and always keep one eye on the sky. And yes, I know my profile photo's backward. I just think it looks better this way.
View all posts by MThomas →
This entry was posted in health care, parenting, Paternity leave and tagged child care, child-raising, family leave, fatherhood, health care, Japan, parental leave, Paternity leave. Bookmark the permalink.