The Ugly Duckling in Japan 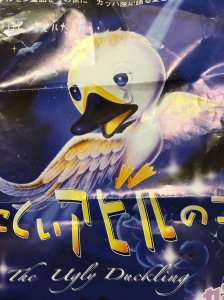 Today, my family went to a performance by a local civic group of The Ugly Duckling, billed as “a moving story of love.” I wonder.

The folk story of the gosling who is raised with ducklings, ridiculed for being different, and then ultimately discovering his true identity, is a classic, famous tale beloved by those who think themselves outcast, rejected, isolated from society for being who they are.

The musical we went to see was very Japanese in the sense that it started with an announcer asking the audience to repeat the “three words of love”:

The last one is a foundation of Japanese education in general. Training children to say “good morning” and “please treat me well” (Yoroshiku onegai shimasu, sometimes translated as “please show me favor”) starts in nursery school and continues well into high school.

Being friends (or, rather, not being friends) was a main theme of the Ugly Duckling, so I thought that made sense. Keeping promises, though, had nothing to do with the story. Nor did giving greetings.

The story is not a particularly happy one, so perhaps in order to appeal to children the theater group decided to add typical moral training as a framework. Sure enough,  the play started and ended with a narrator character — an “old man” who did stage magic at the start and end of each half of the play, and also exhorted the audience to say hello, laugh and be friends.

These moral themes were emphasized between scenes as well. Three actors dressed as frogs with the letters POG on their stomachs (denoting pink, orange, and green…the colors of their outfits) entertained the audience with giant balloons, singing and dancing, and general slapstick, as they encouraged the kids to laugh loudly and be friends.

During the play, however, the older brother duckling is vicious toward the Ugly Duckling (who is called “Pechanko” (literally “flat”) in the play), even punching and kicking him. In one scene, the older brother and his two friends spend several minutes beating up Pechanko, thinking that he had kidnapped their sister.

There is also a wolf character who first tries to capture (and eat) Pechanko, and then actually captures the sister duckling and subsequently Pechanko as well, only being thwarted when a tree falls on him. Between the two wolf scenes, the wolf actor came out into the audience and asked if the kids would be his friends. The audience, of course, shouted “iya da” (no way) repeatedly, as the actor asked three or four times. So much for “let’s be friends.”

Of course, Pechanko the Ugly Duckling is above such things. He saves the wolf, who then runs off saying that he will never forget (and of course we never see the wolf again). Pechanko also befriends…a mini wooly mammoth…who knows how to use a swing set and wants to climb trees…

(We never see the wooly mammoth again, either…)

At any rate, Pechanko rescues his sister from the wolf, saves the wolf from being crushed by a tree, gets beat up by his brother and his brother’s friends…and then finally when his brother realizes that Pechanko was a hero all along, simply apologizes and all is forgiven. I suppose the  moral is “it’s okay to be different, as long as you rescue your sister from a wolf.”

The final scene was the real kicker. After the father, mother, brother, and sister duckling had finally accepted Pechanko, the Ugly Duckling, back into the family despite looking different, the Ugly Duckling undergoes his final, dramatic transformation…a molting into a white swan. At that point, his entire family rejects him. The father even says “You aren’t Pechanko. Go, white swan.” Pechanko then flies off and joins other swans in the sky, calling down, “Goodbye Father, goodbye Mother.”

The closing narration from the “old man” commented that Pechanko visited his parents every year, as a swan, and the event closed with the main characters walking up and down the aisles shaking hands with kids.

Both my kids went to shake Pechanko’s hand, but whoever was inside the costume didn’t see them — or ignored them — and walked right past both my daughters without extending a hand. My youngest daughter burst into tears.

It was very tempting to read too much into the portrayal of the Ugly Duckling story. In the US, the story is often held up as an example of why individualism matters — be yourself, don’t try to copy others, because if you feel you don’t fit, it’s because you are special. The performance I saw seemed at first to say that if you are different, it’s OK as long as you make friends…but ended by implying that those who are different will eventually leave anyways, because they don’t belong.

It’s OK to be different, but eventually we expect you to leave and go back home. Foreigner.

At the end of the day, I felt perplexed. The story of the Ugly Duckling is (naturally) a Hans Christian Andersen story from Denmark, but the flyer for the show in Japan claimed that the musical was popular in the US. I looked up various versions of the Ugly Duckling in musical or stage play form online and couldn’t find anything like what we saw. The message of the play was mixed: be friends with everyone, even if they’re different, but then again, if they’re different, it means they aren’t one of us.

Ultimately, I was left to wonder about my own children: bilingual, bicultural, children of two countries and two backgrounds (at least, maybe three or four, considering that wife is not from where we live, and I, myself, have moved around quite a bit…). Do my daughters have to eventually go back to be with “their kind,” like the Ugly Duckling? Is that how they will be seen as they grow up? Is that how Japanese society is? Tolerant, yet resistant…friendly, yet xenophobic.

A four-year-old child, crying, because her out-stretched hand met nothing.

Long ago, I gave up my high school dreams of becoming the next Carl Sagan and instead wound up working (in order) at McDonald's, a '60s-themed restaurant, a video rental store, a used bookstore, a computer seller, Kinko's, a Jewish newspaper company, and an HR firm. I eventually became a teacher of intercultural communication in Kyoto, where I vainly attempt to apply quantum mechanics to language teaching, practice martial arts and Zen Buddhism, and always keep one eye on the sky. And yes, I know my profile photo's backward. I just think it looks better this way.
View all posts by MThomas →
This entry was posted in entertainment, family outings, Japan, Japanese, Japanese culture, kids shows, parenting and tagged child-raising, cultural differences, folk tales, half-Japanese, Japan, Japanese, racism. Bookmark the permalink.

2 Responses to The Ugly Duckling in Japan