After turning five in January, our youngest daughter finally made to the end of nursery school (“nen-cho,” 年長). Or so we thought.

We had heard rumors in previous years that the system might change. It turns out that in this case the rumors were true.

The nursery school was becoming a kindergarten. Kind of.

Seemingly like everything else concerning children and education in Japan, it’s more complicated than needs be. END_OF_DOCUMENT_TOKEN_TO_BE_REPLACED

Who was that Masked Flu Avenger?

Looking back now, I can laugh.

The first week of February was rough. My wife had to work both weekend days, at the end of an already exhausting end-of-semester work week.

I had also had little sleep. The previous month, my youngest daughter had come down with the mumps, then my oldest daughter and I both got it, too (neatly sandwiching Christmas and New Year’s).

That weekend was going well. Until Sunday around noon. It started with a brief chilling feeling. My kids complained the temperature of the living room was too high. To me it was like a walk-in freezer.

Twas the season. For flu. END_OF_DOCUMENT_TOKEN_TO_BE_REPLACED

Last week, my youngest daughter turned 5. Because three of us (both daughters and myself) were recovering from the mumps, we cancelled her birthday party and rescheduled it for the 14th.

As a reward to both girls for their hard work in setting up fun activities at the party, we took them to a local kaiten sushi 回転寿司 (“rotating sushi”) store called Kura.

I remember going to a kaiten zushi restaurant when I first arrived in Japan; things have changed since then (almost two decades ago). Everything’s automated now. The only time you see workers is when you specifically call them using the “yobidashi” 呼び出し call button.

The bottom “lane” of the kaiten belt constantly rotates to bring random selections of onigiri zushi お握り寿司 (“handshaped”) and maki zushi 巻き寿司 (“rolls”). The top lane is amazing: when you special order something, your order zips along to your table and stops as if by magic. We ordered a beef bowl for my youngest (she won’t touch sushi…) just to see the top lane in action. (The bowl appeared to have a magnet embedded in the bottom…or maybe it was a microchip).

Given that our oldest daughter had performed a magic show at her sister’s birthday party, the magically appearing beef bowl seemed entirely appropriate as an encore! 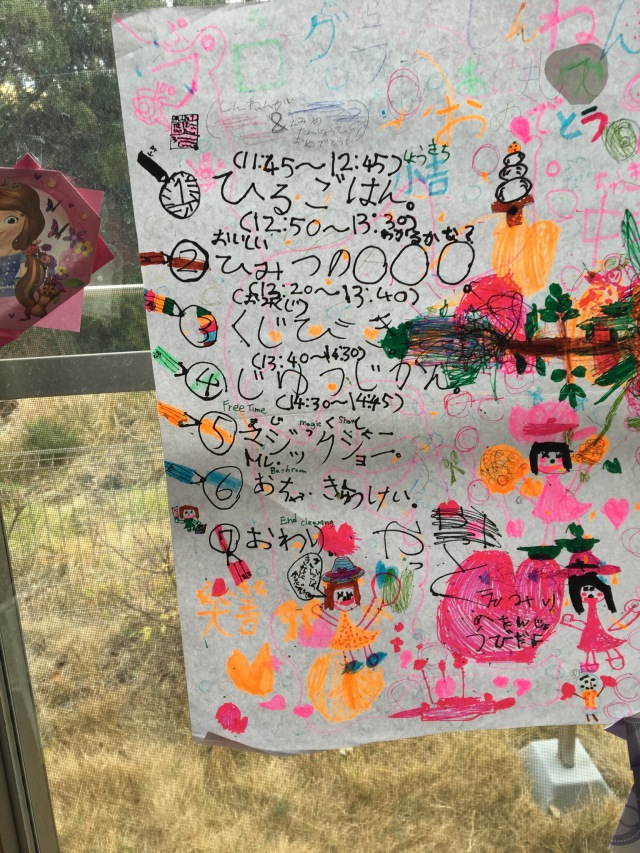 Friday, my two daughters (aged 7 and 4) and I set off on a four-hour bullet train (Shinkansen) ride without my wife. She did see us off at the Shin-Osaka bullet train station, but since she had a week-long business trip in Australia the next day, she couldn’t come with us. It was my first time to take such a long trip with just my kids. To tell the truth, I was a little apprehensive. After all, Japan is well-known as a country where foreign dads and Japanese moms argue over who keeps the children (signing the Hague Treaty on parental child abduction has not changed much of this sensitive issue) and I was concerned that shinkansen passengers might think or say something.

Nothing unusual happened. Both of my daughters fell asleep halfway to the end…Kagoshima, where my father-in-law was waiting to take us home.

It’s been a tiring “vacation” so far, and there’s still a full day and night left before I return (my wife comes the day after the fall term starts, so that’ll be another new experience…). But having just visited my relatives in New York in mid-August, the trip has provided yet again an interesting comparison/contrast between cultures.

In both places, the father (nominal head of household) provided the food and transportation (mainly), while the mother provided the familial/neighborhood contact and clothing. My mother insisted that she pay for new shirts and pants for the kids’ fall classes, while my mother-in-law bought pajamas and towels so we wouldn’t have to bring any (still two days left, so she may buy more…). In both places, the father/father-in-law arranged for a family dinner at a nice restaurant (and in both places the kids sort of (mis)behaved and attached themselves quite literally to new aunts (Japan) and future uncles (US).

There was much more driving (by me) in New York and much more bus/taxi in Kagoshima (I’m too chicken to rent a car and the kids are too young to attempt an overnight ferry from Osaka with our own car). Hot in both places (35C/95F) with random thundershowers in both places (and us without umbrellas…not that they’d matter, likely). And while in the US we went to outdoor public museums (nature) and indoor private tours (Star Trek: Voyages, where my family was volunteering for Trekonderoga), in Kagoshima we went to the city aquarium (where my daughter Emily ran off…because she saw an ice cream vending machine in a side alcove) and a city-run children’s play center.

Overall, we’ve been blessed by both families and cultures. People aren’t so very different, after all. Especially when it comes to kids.

Two weeks ago, my daughter graduated nursery school. Last week, my grandmother passed away (my daughter’s great-grandmother). Today, my daughter walked to elementary school for the first time. And the cycle continues…

This is cherry blossom (sakura) season in Japan, and it’s not hard to understand the timeless appeal of watching a variety of slender trees briefly burst into soft pink and white flower bouquets that almost immediately begin to flutter apart, scattering tiny fragile petals across yards and roads with every gentle breeze. Whether caught up in the increasing crush of Chinese tourists to ancient Kyoto temples or grumbling while sweeping out my front porch (a never ending task), I can’t help but reflect on the truism of the phrase: We do not have time; Time has us. END_OF_DOCUMENT_TOKEN_TO_BE_REPLACED

The end is the beginning 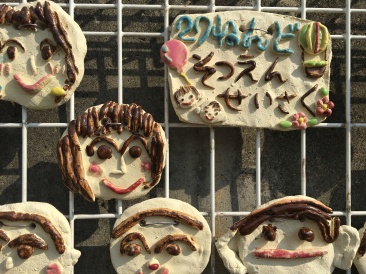 Our daughter is now leaving nursery school. From her birth to my wife’s maternity leave to my paternity leave, from building a new house to finishing a doctorate to switching jobs, from one daughter to another (who’s a completely different personality…) and increasing sibling rivalry, it’s been a long ride.

END_OF_DOCUMENT_TOKEN_TO_BE_REPLACED

It’s the end of February, and our oldest daughter is nearing the end of her nursery school experience. What a ride it’s been.

The song refers to yet another rite of passage for 6 year olds: the “Dutch backpack” of Japanese elementary schools.