The biggest change in my daughter during our North American trip this past August was her first few steps. Predictably, they came after we got her first pair of sandals. 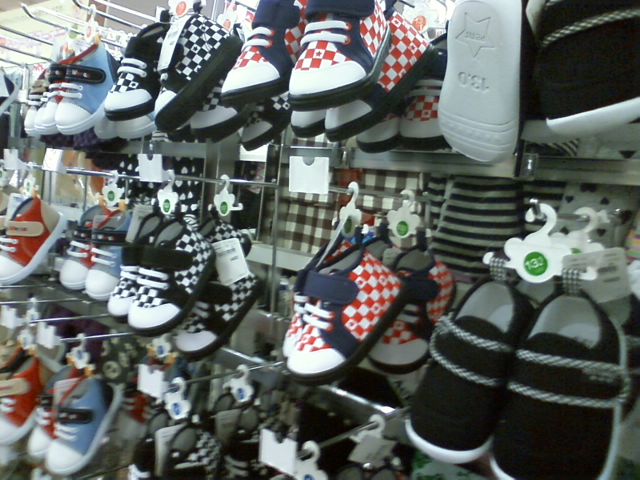 Our hotel was smack in the middle of a large row (more like a rectangle, actually) of factory outlet stores. Gap, Tommy Hilfer, Reebok, and other brand name companies have outlet stores in my hometown area, in order to sucker…ah…attract the attention of big spender…um…thrifty-minded Big City folk who typically throw down $200 to $300 for about $1000 worth of clothing initially rejected by the factory for minor fabric flaws and defects.

We spent $7. Got a pair of baby sandals for $4 from the bargain bin and $3 for a child’s T-shirt. Talk about spend-thrift (hey, we were on vacation…who needs to add to a luggage of ten-days laundry?).

Actually, while rummaging around in the bargain bin to find a match for the left foot sandal with cutesy pink bunnies on it, I uncovered a bargain baby pair of underwear. I don’t remember all the details, but apparently my impromptu monologue between me and the unknown person who decided it would be a good idea to leave a pair of baby underwear to someone like me was so funny that my wife lost her breath laughing and literally fell over sideways into the clothing aisle while I tossed the thing around, trying not-so-surreptitiously to bury it in a small mountain of size 4 shoes.

Anyhoo, we got the sandals, and our daughter was so overjoyed that she insisted on wearing them immediately. And all the time. Anywhere. For the rest of the vacation. After first trying them on outside the store, she walked around (very slowly of course) while holding the index fingers of both my hands and giving me a temporary hunchback (which led to a minor lower back strain for a couple days, but oh well, it was worth it).

The next day in the hotel, she tried walking for the first time. Well, not the “first” first time, if you count the previous handful of flailing attempts to stand ricketedly and totter one or two tiny steps before grabbing onto Daddy and ripping out several strands of arm hair each time.

She really went totally gung-ho into walking. And falling. The hotel room was carpeted, which may have contributed to her determination (our apartment floors are mostly linoleum faux-wood paneling, with one Japanese-style tatami [straw mat] room).

I’ve never felt happier, watching her struggle to get up again without even needing my encouragement, just because she wants to walk on her own. So she finally learned to walk on her own just before the age of 16 months old, which I suppose is a couple of months behind the typical expectation. Meaning that the warning from the “baby whisperer” so-called child-raising expert that using a “baby walker” delays the baby from learning to walk on her own.

(P.S. So friggin’ what? She used a “walker” here in Japan and also in the U.S. They’re toys. She has fun with them. So what if she took a couple of extra months? I don’t understand the “warning.”)

This past weekend, we bought her a pair of green frog-covered shoes (for about $6 to $7)  at a local Aeon Mall, which she picked out herself (over the other choice: a pair of pink bunny-covered shoes…she immediately latched onto the green shoes, gurgling, “Shoe, shoe” and trying to put one on her right foot). Now we can’t stop her from standing up and walking around the apartment, even at night when she’s supposed to be in bed. As my cousin Brian pointed out over the vacation to me, “At first you’re like, Go! go! Then soon it’s like, Ok, stop! Please, stop!”

Before you know it, she’ll be riding a tricycle. Who knows. It already seems so fast.

Long ago, I gave up my high school dreams of becoming the next Carl Sagan and instead wound up working (in order) at McDonald's, a '60s-themed restaurant, a video rental store, a used bookstore, a computer seller, Kinko's, a Jewish newspaper company, and an HR firm. I eventually became a teacher of intercultural communication in Kyoto, where I vainly attempt to apply quantum mechanics to language teaching, practice martial arts and Zen Buddhism, and always keep one eye on the sky.
View all posts by MThomas →
This entry was posted in baby toys, day care, family outings, parenting, trips and tagged baby clothing, baby toys, bargains, child-raising, Japan, Japanese, shopping, walker. Bookmark the permalink.