My daughter had only five or fix teeth when we were on vacation in North America this past August. Despite that fact, she developed an incredible appetite for bread that has only gotten stronger since then.

We had generally avoided giving her bread prior to her first birthday, mostly out of fear that her lack of teeth would lead to the bread sticking to the roof or back of her mouth, potentially choking her, and partly out of worry over wheat allergies (which she turned out not have…which is unsurprising, since neither my wife nor I have any food allergies). 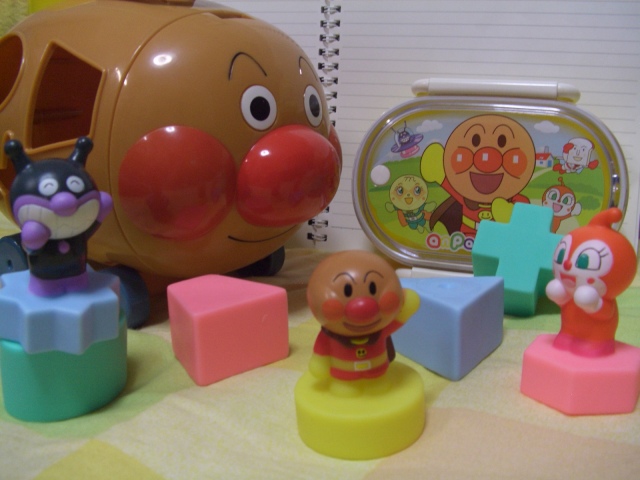 We did give her “baby rice bread,” which was a kind of instant rice cake (dump one package into a bowl, add 50 ml of hot water, and microwave for 30 seconds…presto! Baby shortcake).

Of course, she still eats rice often, as do we all, but the amount of rice has decreased, especially at breakfast when she insists on toast or even (her new favorite) English muffin.

Well, to be honest, rice for breakfast isn’t that bad. Think about what college guys in the US often have for breakfast (leftover cold pizza with green peppers, olives, and pepperoni, and a diet coke). The dietary advantages are fairly obvious.

In fact, when I was teaching at a junior high school, the exchange students from Europe complained to me about rice. Many Japanese families eat rice three times a day – breakfast, lunch, and dinner. “Why can’t we eat something, anything, else?” the students would complain to me. Beats me.

I used to get asked  by my Japanese students and colleagues whether Americans really eat bread three times a day. The joke was that Japan was really a “bread country,” while America was a “rice country.” “Pan” is the Japanese word for “bread” (the word comes from Portuguese and is similar to Romance language words for bread…think “pain” in France). So, JaPAN is JaBREAD. Ha ha. To get the America  a Rice Country joke, you have to realize that it’s possible to write “America” in Chinese characters that sound like “A-MEI-RI-KA” (亜米利加). The character that reads MEI is the same as the character for “rice.” So, America  is a Rice Country.

Anyway, I don’t know if there are American families that eat bread three times a day, but if they did, they would probably eat various kinds of wheat-based products, like muffins, loaves of white/wheat/rye/pumpernickel/French/Italian/etc., breakfast cereals, chips like wheat thins, pretzels, anything made from dough like pizza, canolis, pies, etc.

Now when you compare that to the many kinds of products made from rice, which tend to be sweets…mochi (sticky rice cake rolled into flat balls), sembei (rice crackers), uh…other kinds of mochi…really, mochi is about it as far as rice goes.

I imagine that’s why “an-pan” got so popular. An-pan is a kind of fluffy bread sweet that has a bit of anko (sweet bean paste) in the middle. The story goes (according to my trusty NHK “Sono toki” manga book) that a bakery set up by a retired samurai in early Meiji Period (1870s) was on the verge of bankruptcy. Nobody wanted bread, because it tasted too strongly of bread yeast, which was virtually unknown in Japan prior to the turn of the 19th century. So in a stroke of inspired genius, he stuck bean paste inside it and passed it off as a kind of pastry sweet.

How is this related to my daughter? (I told you that to tell you….)

These are animated characters invented in 1968 by Takashi Yanase. The TV shows are still broadcast, but even if they weren’t, the various knickknacks for kids would probably still sell like gangbusters. Anpan-man action figures. Anpan-man lunch boxes. Anpan-man stickers. Anpan-man shirts, pants, underwear, toothbrush sets, every kind of baby toy conceivable, you name it.

The last time we brought her to the doctor’s office for her year and a half check-up, my daughter seized on a pair of Anpan-man slippers and howled when it came time to leave. We didn’t get her a pair at home, but did use up our “purchase points” at a nearby drugstore to get her an Anpan-man-mobile, that came with figures of Anpan-man and his archrival Baikin-man (“germ-man”), who, along with other shapes like triangles and ovals, are supposed to be matched with the appropriate hole in the Anpan-man-mobile.

What usually happens is that she shouts “That’s Anpa da!” and throws him halfway across the room before toddling over, picking him up, and doing it again. Oh, and occasionally she demands that we open the Anpan-man-mobile so she can take out the various shapes and fling them across the room, as well.

That’s what you get for trying to get a girl from Rice Country to eat her rice at breakfast in JaBread-Land.

Long ago, I gave up my high school dreams of becoming the next Carl Sagan and instead wound up working (in order) at McDonald's, a '60s-themed restaurant, a video rental store, a used bookstore, a computer seller, Kinko's, a Jewish newspaper company, and an HR firm. I eventually became a teacher of intercultural communication in Kyoto, where I vainly attempt to apply quantum mechanics to language teaching, practice martial arts and Zen Buddhism, and always keep one eye on the sky. And yes, I know my profile photo's backward. I just think it looks better this way.
View all posts by MThomas →
This entry was posted in baby toys, eating, entertainment, kids shows, parenting and tagged Anpan, baby food, baby toys, child care, family leave, Japan, Japanese, parental leave, Paternity leave. Bookmark the permalink.