Today we went to “open day” at a nearby “international kindergarten,” where our oldest daughter has gone for two years to Saturday classes. The previous week, our youngest daughter joined the four-hour class for the first time, but we were not allowed to watch. There were about a dozen kids ranging in age from 3 to 6, but they all seemed to enjoy singing in English, playing English card games, and responding to simple questions like “What’s your name?” and “How old are you?” 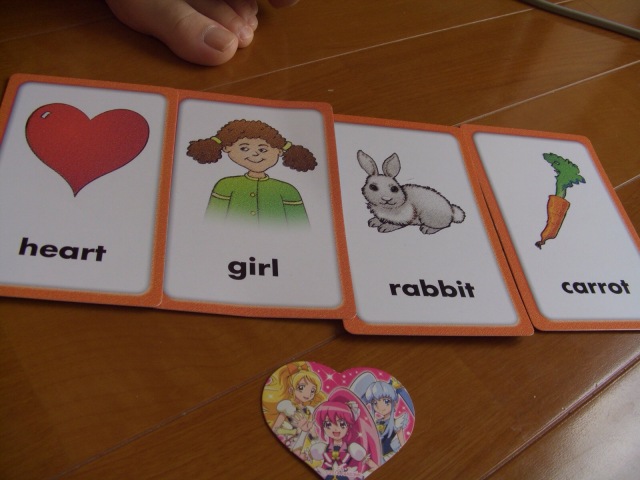 As a former Japanese Exchange Teacher (JET) Assistant Language Teacher (ALT), who was ostensibly part of this “internationalization,” I am naturally suspicious of any program that claims to be international. In my experience, most of the international claims simply mean that there are non-Japanese teachers. The program and administration are often restricted by MEXT guidelines, and the students are usually only Japanese.

And, yes, there are a lot of acronyms here. MEXT. JET. ALT. Alphabet soup.

So we’ve been pleasantly surprised by the international kindergarten. One of their stipulations for teachers, Japanese and non-Japanese, is that everybody speak English to the students. It’s refreshing to see Japanese teachers use English with students, and the kids do a lot of hands-on activities in English.

There has been a great deal of controversy in Japan recently over the introduction of English into the elementary school curriculum. Starting this April, 5th and 6th grade English classes will be bumped up from more or less extracurricular activities to full-on subject courses, and English as a club sort of activity will be introduced into 3rd and 4th grades in some schools. Some worry that learning English at a younger age will prevent Japanese students from learning their own language.

I heard this very same concern when I visited Singapore a couple years with technical college students, and again this past December at a language conference. But of course Singapore is a completely different learning context from Japan. English is an official language there. It’s not official in Japan. My kids go to a local nursery school run by a Buddhist temple, and there is no English. They are exposed to Japanese all day long, five (sometimes six) days a week.

So there is no reason to think that their spoken Japanese will suffer. I think the real concern is about Chinese characters. Japanese newspapers are (in theory) supposed to use only the basic “joyo kanji” (daily use Chinese characters) which numbers just over 2,000. Academic texts and novels of course require many more (the kanji dictionary I have at home has roughly 7,000 characters). That’s an awful lot of characters to memorize compared to just 26 letters in English.

To be honest, I’m not terribly concerned about it. My knowledge of the field of bilingualism and bilingual studies is not as deep as other areas of language education, but I don’t think there is any real evidence to support “subtractive bilingualism,” where one language suffers at the expense of learning another. Learning languages at a younger age leads to “additive bilingualism,” where one language supports the learning of another. There are many more bilingual, trilingual, and multilingual people in the world than there are monolingual people, particularly in Africa and South and Southeast Asia.

What bothers me more is the attitude expressed on the sign at the front of the “international” kindergarten: “Japanese spirit, English ability.” It seems like a blatant appeal to nationalism, or perhaps it’s meant to be a reassurance that learning English will not make your kids any less “Japanese.”

I don’t get that sense at all from the teachers (Japanese, New Zealand, American, Australian). Maybe I’m just overreacting. But I would like to see a sign explaining positive reasons for learning another language and not dwelling on the “Japanese spirit.”

Long ago, I gave up my high school dreams of becoming the next Carl Sagan and instead wound up working (in order) at McDonald's, a '60s-themed restaurant, a video rental store, a used bookstore, a computer seller, Kinko's, a Jewish newspaper company, and an HR firm. I eventually became a teacher of intercultural communication in Kyoto, where I vainly attempt to apply quantum mechanics to language teaching, practice martial arts and Zen Buddhism, and always keep one eye on the sky. And yes, I know my profile photo's backward. I just think it looks better this way.
View all posts by MThomas →
This entry was posted in Japan, parenting, school and tagged English education, internationalization, kindergarten, language learning, wakon yosai. Bookmark the permalink.